St. Paul says that we are to be regarded as “the servants of Christ and the stewards of the mysteries of God” (1 Cor. 4:1)

I’m reminded of one of the readings from the Liturgy of the Hours, I think it is from Romans, but the line says: “He whom you serve is the Lord!” I am always consistently amazed at the blessing that the Lord continually puts into my life. It’s not that I’m amazed that he would bless me or give me a joy, but sometimes in my own sinfulness, I think, “Who am I to be able to experience this?” I’m

continually made aware of my own failings and lack of abilities, but when I place those in the presence of Christ at the foot of the cross, it’s amazing to watch and see how he will take something so small and turns it into something which I can experience his love and his mercy in my own life.

Part of my summer assignment at Holy Spirit is to join a group of faithful folks (called the Ministers of Care) each Friday morning to bring the Holy Eucharist and a friendly face to some of our shut-ins and homebound from the parish. I’m continually amazed at how the Lord never ceases to either smack me upside the face and bring me back to reality or how he humbles me through these Friday visits.

There are several people whom I have gone to see who are just sweet as can be, who love to sit and chat, ask about you and even remember your name and things you have spoken about even though you haven’t seen them for a couple weeks as someone else went. At the same time though, I am reminded of how much our world is hurting, how much healing is needed and how we need the presence and mercy of Christ more than anything in the world.

On one of my visits to the hospital, my first “communicant” if you will started talking ill of Muslim’s, RIGHT after he had received communion. The irony of having received the Sacrament of Charity, and some of the things he was trying to get me to comment on  was crazy! Another time, the spouse of a Catholic man would not permit us to visit him, due to her not agreeing with the Church’s teaching on divorce and remarriage. And then there was the time I got to visit and bring communion to a couple who had just welcomed their first child into the world. To think, I got to be the first person to bring Jesus to visit her outside of the womb!

This past week, one of the gentlemen that I visited was bed-ridden and had a huge pitbull and a boxer. As I went to see him the boxer hopped in bed with him and we began the Rite of Communion for the sick. It was a good learning experience for me of the need to be flexible. The gentleman was going in and out of consciousness and I was left praying a lot 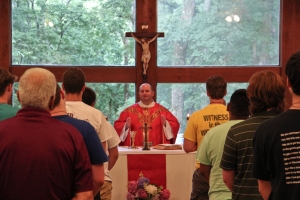 of the prayers like the Our Father by myself. I was reminded though in the moment, of the great “Cloud of Witnesses,” the “Communion of Saints” that were no doubt gathered around the bedside with me, adoring Christ and praying on behalf and for this gentleman.

When the priest celebrates a Mass by himself and not with anyone else he doesn’t say the responses to certain prayers. When he says: “The Lord be With You” or “Lift up Your Hearts” He doesn’t answer, because those present in the Communion of Saints answer them. We are always surrounded by those who having gone before us are marked with the Sign of Faith.

Immediately after receiving Communion, the gentleman said that he wished they made hosts for puppies and that I would give communion to his dog.

Oh my! I had to laugh and chuckle and remind him that only humans could receive the Eucharist, lest he try to take the host he was chewing and give some to his dog. It was amazing though that the dog in the cage stopped barking and the dog on the bed stopped moving and laid its head down when I brought the host out of my pyx and said: “Behold the Lamb of God, behold Him who takes away the sins of the World…” Animals, being created by God have a sense of the holy. St. Francis of Assisi, my patron gave many wonderful examples of this.

As Christians, we are each called to be “Servants of Christ” as a man in formation for the priesthood, I hope one day to fully be able to be a “steward of the mysteries of God.” Until then, I get to have these small but beautiful encounters of the life of a priest, in bringing Christ’s healing love and mercy to the world, through the great Sacrament of Charity, the Sacrament of Unity, the Holy Eucharist.

I had a priest friend who told me that when I go on a Communion call, to help those I am bringing Christ to, to recognize that it indeed IS Jesus. So often, when we’re outside of the Sacred space of the Church building, and standing in the middle of a lysol-smelling hospital room, it can be easy to become lax, but the simple pauses, redirecting conversation back to the prayer, genuflecting to the pyx, before distributing communion, little details help to bring the Sacred to the secular. One of my favorite parts of Lumen Gentium is where the Council Fathers remind us that we are called to sanctify the secular. We are called to bring Christ to the world and remind them of his presence.

As I go on communion calls, as I spend those precious moments in the car, carrying Christ in my burse hanging upon my breast, over my heart I pray for those I am going to see. I pray for those that I drive by, that even if they don’t know Christ is passing them by, that he will touch them and bring them his love and mercy. Each time that I meet someone and get to bring Jesus to them in Holy Communion, I am reminded of the beauty of the Sacrament, and the great gift to be, at that moment, a servant of Christ and a steward of the greatest mystery of God.