A Fake Bishop tries to get into the Conclave…WHAT?!?

Yes, you heard that right, a man who tried to impersonate a Bishop was escorted from a meeting of cardinals by members of the Swiss Guard on Monday. They figured out that he was an imposter when they noticed his purple “fascia” was too short and he was wearing a black fedora. Well, of course the purple “fascia” was too short, as it turned out to be a scarf. Australian ABC News, says that he claimed to be “a member of the “Italian Orthodox Church”, which does not exist. Before he was discovered, he told reporters Catholic bishops had “made a mistake by moving priests” who were accused of paedophilia around different parishes.”

You can find the full story at the link above, but below is a picture of the “imposter.” This story is just an example of the type of attention that the election of the pope is getting. It is receiving a lot of negative talk, when it should really be positive. Let us join in praying for our church and asking our dear Blessed Mother to call all to a conversion of heart.

I hesitate to even refer to this, but it shows the attacks on the Catholic Church in being the very real, disturbed, and demonic acts that they are. It was just the other day, that I saw a Huffington Post news video (though the actuality of them being a news source is questionable), where a person was saying that Pope Emeritus Benedict XVI was a homosexual. Because, Archbishop Ganswein would continue to live with him and help him, while serving the new pope. What type of person, calls an 85 year old man a homosexual, because he lives in community? What would you call a men’s ward at a nursing home, where men live in community? The negativity that is expressed towards his holiness and the Catholic Church is horrendous, but it is something that the church has to continue to deal with.

In the Gospel of Matthew, 6:18; Jesus didn’t say that the the gates of the netherworld wouldn’t attack the church, he said that they would not prevail against it! Let us continue to pray for our church and for the College of Cardinals, that they will be able to elect someone who will have the strength, knowledge, and graces to guide our church. Pray for the next Holy Father! They don’t call the room where he vests after his election the “Room of Tears” for nothing. The duties and responsibilities of the office of Peter is one that requires much strength.

Back to the original story now:

AABC also says that: “Mr Napierski claims on his blog he is a founder of the Corpus Dei Catholic order. He also says he invented “a system to enable persons to control computers with the power of thoughts”.”

Until next time! Have a blessed Tuesday and keep praying for the election of the 266th Succesor of Peter. God knows who it is, pray that the Holy spirit will fill him with grace! 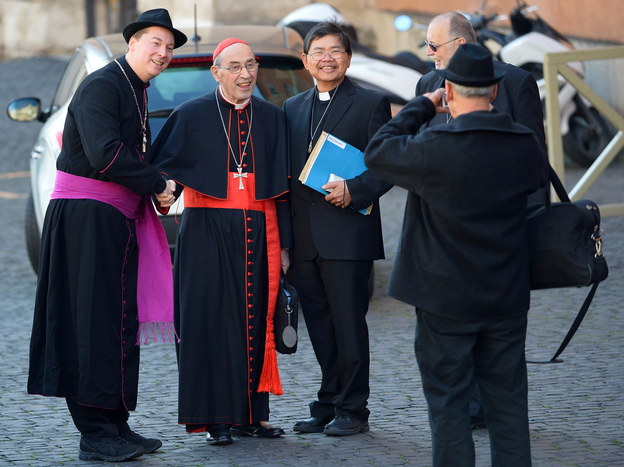 Can you spot the impostor? Hint: Notice the purple scarf!

I’m SO PROUD AND EXCITED for my brother seminarian who is now Father Stephen Van Lal Than! What a blessing his friendship is and what a gift to our Diocese and Church his Ministry has been and will continue to be! It’s been 4 years since our last Priesthood Ordination in the Roman Catholic Diocese of Owensboro Kentucky, today the drought ended! The Holy Spirit has blessed us with Father Stephen’s yes to serve. Please pray for this new, holy priest of Jesus Christ!
Excited to share that I’ll be spending the summer at Saints Joseph and Paul Catholic Church in Owensboro! I’m very much looking forward to my time there. ¡Emocionado de compartir que pasaré el verano en la Iglesia Católica Santos José y Paulo en Owensboro! Estoy emocionado por mi tiempo allí.
Sad to be leaving my buddy tomorrow. She’s helped me get a lot of projects done and kept wonderful company!
Good to be back home in Quincy for a visit! Ft. my Mom’s Easter rabbits.
Interesting clouds last night over @saintmeinrad I’m going to miss my view from my suite over the summer!
Spring photos on the Hill of @saintmeinrad