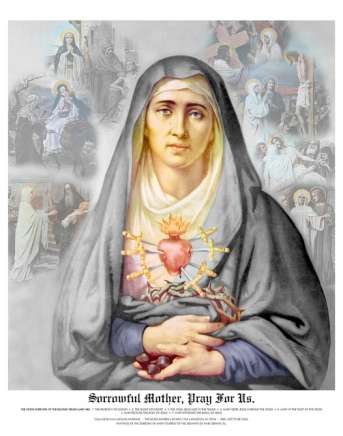 Our Lady of Sorrows

Today, in the liturgical year, we as a church celebrate the 24th Sunday in Ordinary Time. Since Sunday’s have the ranking of a Solemnity, we do not celebrate the Memorial of Our Lady of Sorrows. Just, because we don’t celebrate it within the liturgy today, doesn’t mean that we should forget it though. There are many great saint’s feasts that do not get celebrated during  the Liturgical year, just because they fall on a Sunday of the secular calendar. (Exception discussed here)

Our Lady of Sorrows or in latin: Beata Maria Virgo Perdolens, is also sometimes known as:

Our Lady of Piety

Our Lady of the Seven Sorrows

Our Lady of the Seven Dolours

Regardless of under what title you call her, Our Lady of Sorrows is an important image of the Blessed Virgin used in the church. In Luke 2:25, Simeon meets Joseph, & Mary as they take Jesus into the temple to present him to the lord after his birth. Luke 2:35 states that Simeon told Mary: “(and you yourself a sword will pierce) – so that the thoughts of many hearts may be revealed.”  Mary, through her life on earth with Jesus suffered much. The church attributes seven primary sufferings to her though, which help us to come closer to Christ and share in his passion and our Blessed Mother’s anguish at seeing her son treated this way.

1.) The prophecy of Simeon.

“And Simeon blessed them, and said to Mary his mother, ‘Behold this child is set for the fall and rising of many in Israel, and for a sign that is spoken against (and a sword will pierce through your own soul also), that thoughts out of many hearts may be revealed.’” (Luke 2: 34-35)

“Now when they had departed, behold, an angel of the Lord appeared to Joseph in a dream and said, ‘Rise, take the child and his mother, and flee to Egypt, and remain there till I tell you; for Herod is about to search for the child, to destroy him.’  And he rose and took the child and his mother by night, and departed to Egypt, and remained there until the death of Herod.”  (Matthew 2: 13-15)

3.) The loss of the Child Jesus in the temple.

“And when the feast was ended, as they were returning, the boy Jesus stayed behind in Jerusalem.  His parents did not know it, but supposing him to be in the company they went a day’s journey, and they sought him among their kinsfolk and acquaintances; and when they did not find him, they returned to Jerusalem, seeking him.” (Luke 2: 43-45)

4.) The meeting of Jesus and Mary on the Way of the Cross.

“And there followed him a great multitude of the people, and of women who bewailed and lamented him.” (Luke 23: 27)

6.) The taking down of the Body of Jesus from the Cross.

“And when evening had come, since it was the day of Preparation, that is, the day before the sabbath, Joseph of Arimathea, a respected member of the council, who was also himself looking for the kingdom of God, took courage and went to Pilate, and asked for the body of Jesus.  And Pilate wondered if he were already dead.  And when he learned from the centurion that he was dead, he granted the body to Joseph.  And he bought a linen shroud, and taking him down, wrapped him in the linen shroud…” (Mark 15: 42-46)

“Now in the place where he was crucified there was a garden, and in the garden a new tomb where no one had ever been laid.  So because of the Jewish day of Preparation, as the tomb was close at hand, they laid Jesus there.” (John 19: 41-42)

This beautiful tradition of honoring Mary as the Mother of Sorrows can be done in many different ways. You can meditate on her sorrows, pray the chaplet of the seven sorrows, or pray the servite rosary. One of the men here at Bishop Bruté, who blogs here, has a strong devotion to Our Mother of Sorrows. After making my Marian Consecration in June on the Feast of the Immaculate Heart I try to celebrate the various Marian feasts that pop up and take them as a time to ask for her intercession in my life. Today, though has special significance to me, as Our Mother of Sorrows and the Immaculate Heart are commonly used interchangeably. (The Immaculate Heart is that which Simeon prophesied to be pierced by a sword.)

Whatever image of the Blessed Mother you find yourself with a particular devotion to, it is important to remember the reason behind our devotion and reverence for Mary. As the Mother of God, she gave her “Fiat” to the angel Gabriel when he appeared to her and told her that she would give birth to Jesus the Christ. Mary said yes to God; she became the first disciple of Jesus, and she dedicated her life to caring for him, protecting him, watching and weeping as he was hung upon a cross and crucified for the sins of the world. Mary constantly through it all pointed to Him, she always directed those around her to her son, and it is with that same spirit that we ask for Mary’s intercession in our lives. We ask her to help us to grow closer to that “bone of her bone and flesh of her flesh.” We ask for Mary to watch over us, shield us with her mantle, and shower us with grace so that we may constantly strive for Christ and may one day rejoice with him in Heaven.

Our Lady of Sorrows, whose immaculate heart was pierced for love of thy son, pray for us!

The above video is of the beautiful hymn: Stabat Mater Dolorosa, written by: Giovanni Battista Pergolesi.

Stabat Mater Dolorosa is translated as: “The Sorrowful Mother Stood. The hymn sung when processing from each of the Station of the Cross: At the Cross her station keeping comes from a translation of this hymn.

I’m SO PROUD AND EXCITED for my brother seminarian who is now Father Stephen Van Lal Than! What a blessing his friendship is and what a gift to our Diocese and Church his Ministry has been and will continue to be! It’s been 4 years since our last Priesthood Ordination in the Roman Catholic Diocese of Owensboro Kentucky, today the drought ended! The Holy Spirit has blessed us with Father Stephen’s yes to serve. Please pray for this new, holy priest of Jesus Christ!
Excited to share that I’ll be spending the summer at Saints Joseph and Paul Catholic Church in Owensboro! I’m very much looking forward to my time there. ¡Emocionado de compartir que pasaré el verano en la Iglesia Católica Santos José y Paulo en Owensboro! Estoy emocionado por mi tiempo allí.
Sad to be leaving my buddy tomorrow. She’s helped me get a lot of projects done and kept wonderful company!
Good to be back home in Quincy for a visit! Ft. my Mom’s Easter rabbits.
Interesting clouds last night over @saintmeinrad I’m going to miss my view from my suite over the summer!
Spring photos on the Hill of @saintmeinrad